Our fourth day in Istanbul was intense—in a good way. The weather was amazing, one of those days with a clear blue sky that reminds you that summer is approaching. Some of us went to a nearby place called Brekkie Croissant & Cookie where we got breakfast while sitting in a sunny garden. They really had an amazing selection of breakfasts, and the portions were so big that some of us were not hungry until 4 pm.

After this, we went to the first meeting of the day, which was with the Freedom of Expression Association (IFÖD). Most of the activities of the association include protection and promotion of freedom of expression, freedom of the media, Internet freedom, and academic freedom, all of which very nicely put in context the previous visits we had at the Swedish Research Institute and at the Human Rights Association. They also provide training for young lawyers and law students. It was impressive to see how committed people at this place are because the government often tries to hinder their work with various inspections and even lawsuits. One of the co-founders of the organisations who spoke to us, Prof. Yaman Akdeniz, is currently being sued for his tweets about the censorship of reports into the criminal investigations and civil lawsuits against journalists who reported on the Paradise Papers. It only shows how dangerous it is to fight for justice in Turkey, yet people continue which is admirable.

The first visit was so interesting that we lost track of time and realized that we are running late for our second study visit. We had to take the ferry and climb about thousands of stairs (not exaggerating) in the burning sun. But once again, it was worth it, because this time we visited the organisation Hafıza Merkezi, or in English Truth, Justice, and Memory center. The purpose of these human rights organisations is to uncover the truth concerning past violations of human rights committed in the name of nationalistic ideologies, disseminate the truth outside the official discourse, and support survivors and help them prosecute violations. This regards for example state-sponsored suppression throughout Turkish history, such as the Armenian genocide or the ongoing oppression of the Kurdish people.

After learning many interesting things at Hafiza, we decided to go to the Grand Bazaar which we had heard a lot about. It is one of the oldest and largest covered markets in the world, which makes it compelling to visit not just to do some shopping but also to see the architecture. Besides this, some of us went to visit some nearby mosques, while others went to a hip quarter of Balat or a Spice market. We decided to meet up in the evening for what turned out to be an experience most of us will not forget—a hammam, or a Turkish spa. We went to one called Tarihi Galatasaray founded in 1481—and when we were inside, the architecture definitely looked like it! After a sauna and a thorough scrub, we felt like newborn babies and finished Thursday with some nice tea and baklava at a famous baklava place. 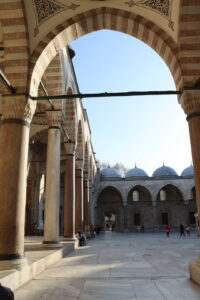 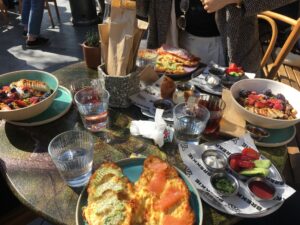 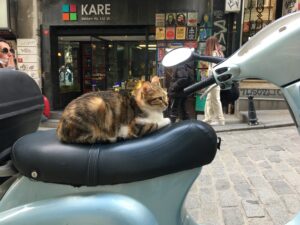