Hello from Istanbul!
On our third day, Wednesday, we first visited a Women’s Rights Organization. The organisation talked about the current situation for women in Turkey. Among others, they mentioned how they tried to empower women by teaching about rights and possibilities. They also mentioned the difficulties of having children and working simultaneously. For instance, around 70% of all women (adults) are at home taking care of their children. This is despite the fact that half of all university students are girls.

Thereafter, we visited a Human Rights Organization. It is difficult to summarise everything that was said during this study visit; but in short, the organisation painted a very dark picture of the current situation for freedom of speech in Turkey. Both of the persons we talked to, a journalist that also acted as an interpreter for us, and a lawyer, had been in jail because they had written articles that were not aligned with the opinions and agenda of the government. They also mentioned how the Kurdish minority is oppressed. The journalist talked about a massacre in the 80s that happened in his hometown. This happened because the Kurds were seen as a threat to the Turkish majority. Furthermore, they also talked about how it is to live in an authoritarian society, and how they find hope to continue their work.

Other highlights of the day: 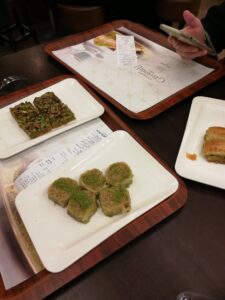