Hello! Hoping you are having a nice day because we certainly are.

Our first full day in Istanbul started with a nice lazy morning – at least for those of us who did not have to study or work. After a tasty breakfast in our hostel, we slowly made our way to one of Istanbul’s must-sees: Hagia Sophia. Decorated with mosaics and marble pillars, the mosque represents one of the greatest and most impressive expressions of Byzantine architecture and holds a history that will leave you speechless. Built during the era of Constantinopole in the 5th century, the Hagia Sophia was the largest Christian cathedral in the Byzantine Empire. It was converted into a mosque during the Ottoman Empire in the 15th century to be turned into a museum in 1935 as a part of Ataturk’s secularization reforms. In 2018, it was re-converted back into a mosque by the current Turkish president Erdogan, which has provoked a strong international reaction.

Afterward, we strolled through the colorful streets of Istanbul as we passed by tiny shops with baklava, Turkish delights, and oriental carpets. The first thing you notice when you visit Istanbul for the first time is, however, how many cats are there – simply a paradise for a cat person, but you also meet a dog here and there. After lunch, we were ready to tackle the world, and taxi drivers seemed to take it as a challenge to kill us, or at least scare us by speeding in the narrow streets of Istanbul. But we successfully survived and moved to a lively and modern area of Kadıköy for our study visits.

Our first meeting of the day was with the researchers from the Swedish Research Institute in Istanbul (SRII) which is located within the area of the Swedish Consulate. The institute focuses on promoting Nordic research, especially about Turkey and the Eastern Mediterranean. We were warmly welcomed with a fika and the researchers told us about their work at the institute as well as about possibilities for students to write their thesis there. What was quite interesting to learn is that the Turkish government understands SRII and the Swedish Consulate as one institution. This means that the researchers have to be cautious as their opinions could be interpreted as those of the consulate.

We continued to our second meeting at the Swedish Consulate located in a historic Swedish Palace, just a few meters from the SRII. Consul General of Sweden in Istanbul Peter Ericson was there to meet us and talk to us about his career path, current international relations, and the history of the palace. He also gave us some tips on how to get a job in the field of foreign affairs which could be quite useful.

The rest of the day we just walked around, took pictures and had a very good dinner at a place recommended by a travel guide. Three more full days ahead of us! 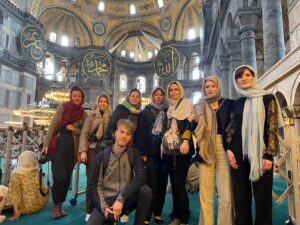