Wednesday the 10th of April –  Human rights morning, the EU and lastly, hikingtrails

After the previous day’s tour, it was time for the first meeting with a Georgian NGO. As early as 9:00, the travel committee was at the office of the Institute for Development of Freedom of Information (IDFI). Shortly after the presentations were made, the organization’s representatives discussed the IDFI’s history, structure and current projects. The institute was established in 2009 by two Georgian academics Levan Avalishvili and Georgi Kldiashvili. Its principal purposes are to research and inform the country’s citizens about the government’s public money expenditures and laws as well as facilitating the public access to the internet, as a part of implementing the Sustainable Development Goals. Topics such as IDFI’S project of researching of the old Soviet Archives, with the goal of identifying the victims of Communism as well as the public information portal opendata.ge were also on the day’s agenda.

Next, the committee met Transparency International Georgia. The organization is present in Georgia since 2001 and has been involved in various projects, including the opendata.ge in collaboration with IDFI. We met with Erekle Urushadze who explained the problems with corruption in Georgia, and its consequences on European integration. However, there has been a lot of improvement, and low-level corruption has been almost entirely eliminated. The problem is with high level corruption and therefore the public trust in the government is low. On the other hand, this is one of the reasons Georgia has such an active civil society and many NGOs. Erekle also explained that even though petty corruption is unusual today in Georgia, many people still believe that it is common. This of course makes it difficult to measure the level of corruption, as you get different results from personal surveys compared to measures of for example transparency or democracy.

A ten minute taxi drive took the UPF members to the Human Rights Center, an NGO committed to protect the Human Rights in Georgia, partially guaranteed by the Article 42 of the state’s constitution. Founded in 1996, under the name Human Rights Information and Documentation Center, HRC has been active in the process of reconciliation between Georgians and Abkhazians through various projects such as the “Sorry Campaign”. The ”Sorry Campaign” was meant to peacefully extinguish the existing disagreements through dialogue and by recognizing that both sides of the conflict has made mistakes. Talks also focused on themes such as police efficiency in cases of domestic violence, monitoring the 2018 elections, the current status of the LGBT community in Georgia as well as the elimination of bad treatment for the inmates in the country’s prisons.

The fourth meeting of the day was with the European Delegation. We met with their representative and talked about the Eastern Partnership and Georgia’s ambition to join the EU. We learned that Georgia has a very comprehensive agreement for political and economic integration with the EU, which is called the Association Agreement. Georgian citizens can for example travel to the EU for three months without a visa. However, it was also clear that an EU membership is a long-term goal rather than something that will happen in the near future. Even though Georgia is improving fast, there are still some challenges that stand in the way of the EU membership. Some examples are: high level corruption which hinders fair and free elections, lack of a fair and free judiciary and also the conflict with Russia and the breakaway regions within the country.

The day ended at Café Flowers with our last meeting of the day and also dinner. We met Paul

Stephens, project manager for the Transcaucasian trail, who told us about his current project of building a 3000 km long hiking trail through the Caucasus mountains, which he thinks will

substantially increase the country’s appeal for tourists. He also told us that Georgia has great alpine skiing (who knew?). We had some delicious Georgian food and Paul taught us some Georgian words (which came in handy later when we tried talking with our cab driver)! The day ended with a beautiful sunset and a panoramic view overlooking Tbilisi. 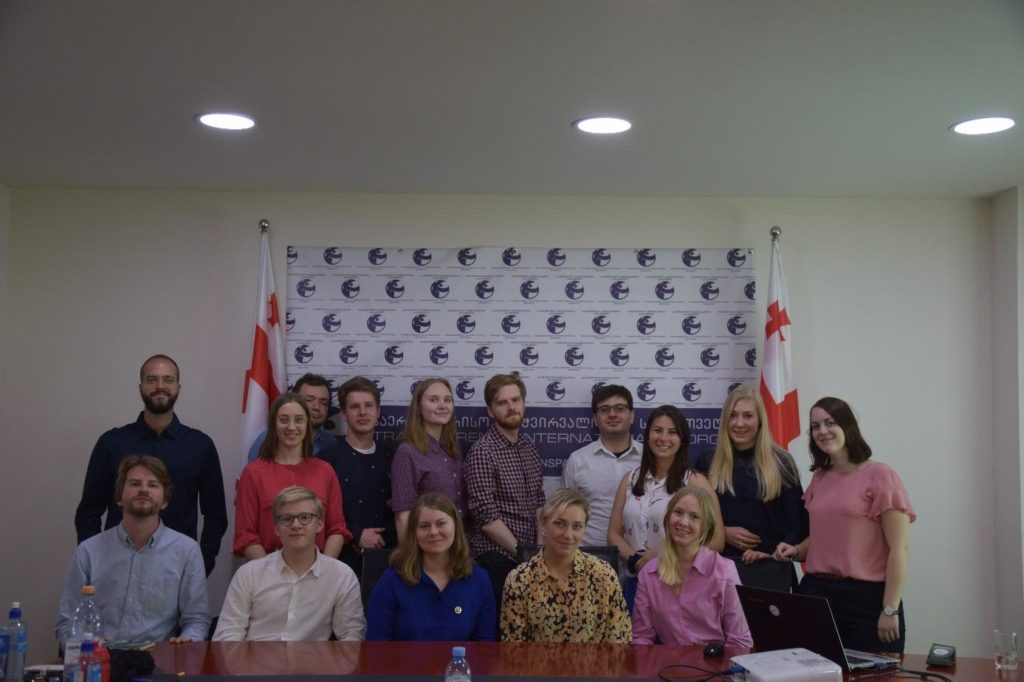 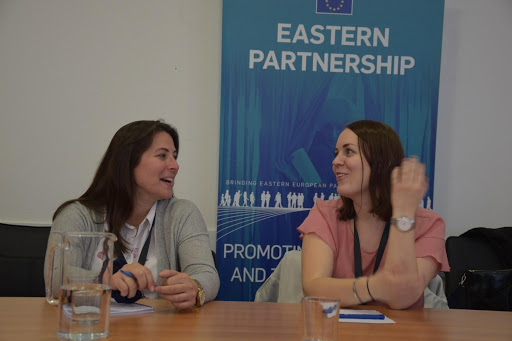 Colette and Josefin discussing EU-Gerogia relations at the office of the European mission. 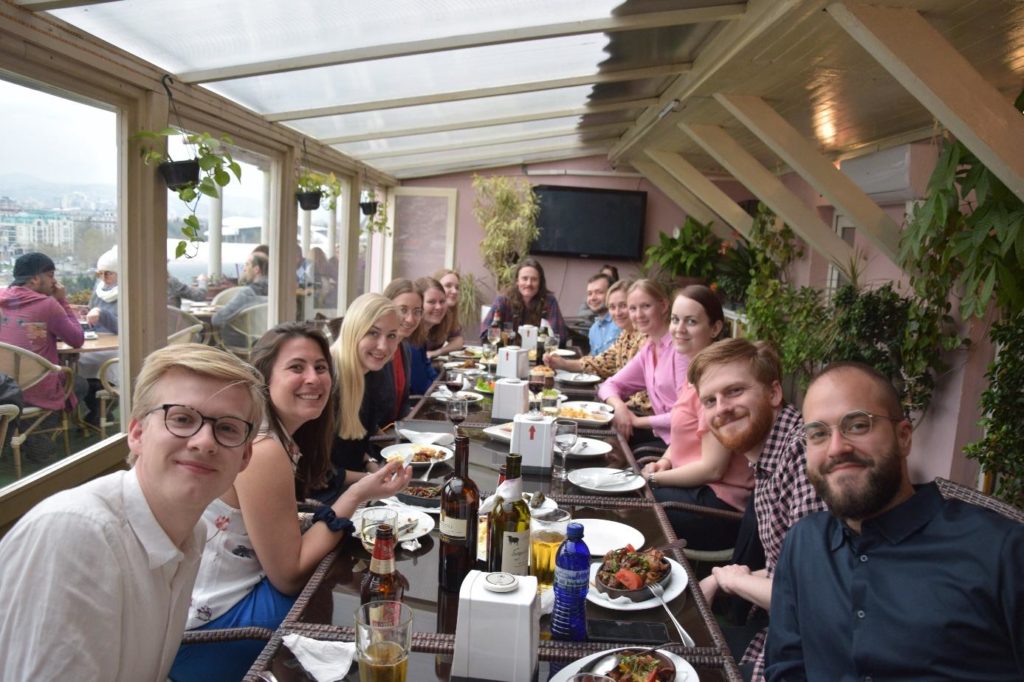 Dinner with Paul Stephens – initiator of the project to establish a Transcaucasian hiking trail.