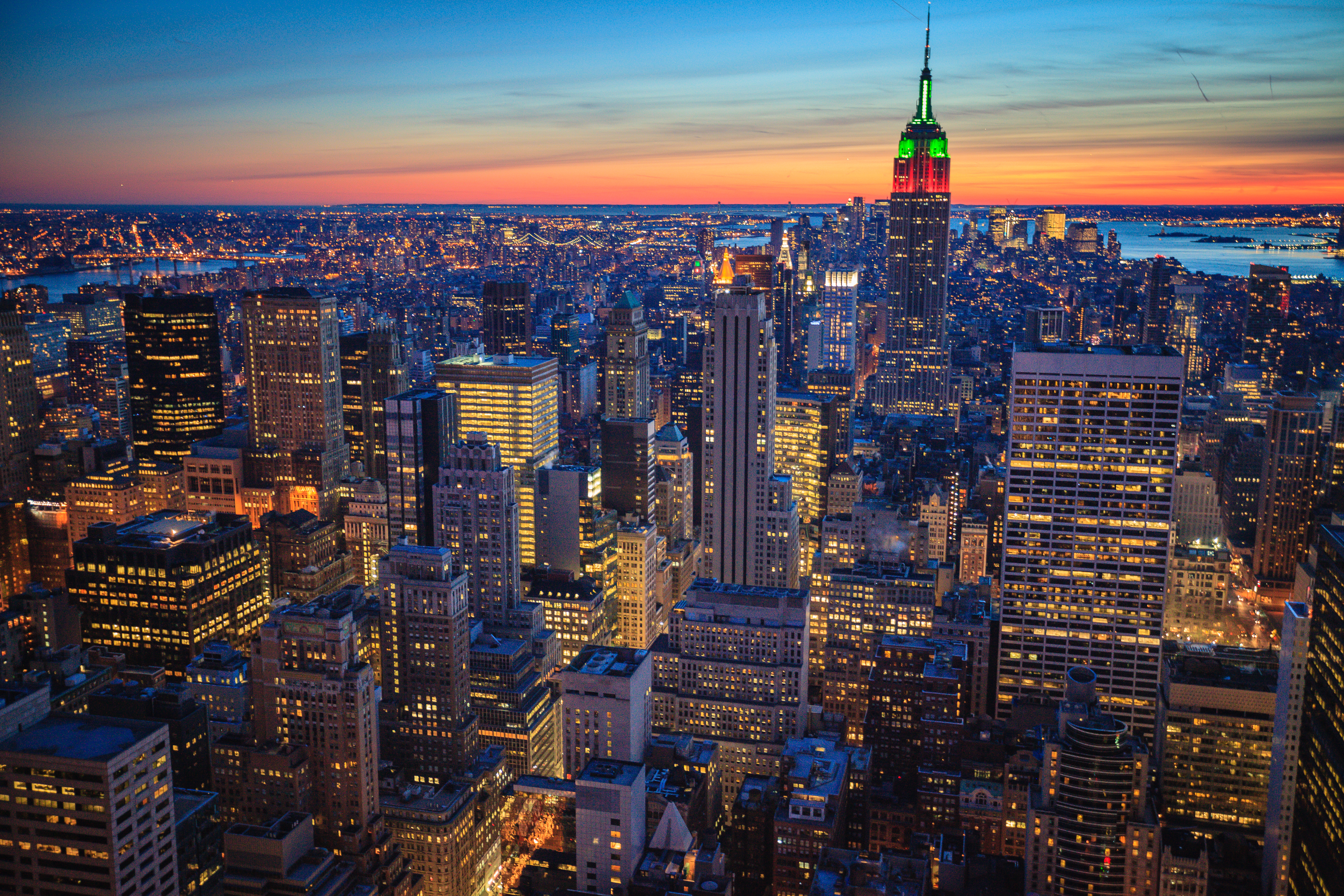 “The truth is that every intelligent man, as you know, dreams of being a gangster and ruling over society by force alone…” – Albert Camus, The Fall.

Never has a city made me change my perspective of the world as much as New York – and all in less than a day.

Gorgeous weather greeted me on my early afternoon arrival in New Jersey, and I was starstruck. The view from the airport passport control queue was majestic – a backdrop of Manhattan skyscrapers on the horizon, with the hustle and bustle of Newark in the foreground.

My first reality check came an hour and a half later. I hadn’t moved very far – an hour long queue for customs made sure of that – but I was now on the AirTrain from the terminal to Newark station, taking in a bird’s eye view of New Jersey. As the train slithered to a halt, I look over to my left and – BAM! – it hits me. One of the New Jersey state penitentiaries, with forty inmates outside, shirts off, shootin’ hoops [1] and looking menacing.

Hmmm, I don’t remember seeing that in the tourist guides.

I was far enough away – 40m – that they weren’t going to knock on my train window and administer a beating, but I nevertheless decided not to risk being caught staring, especially as the train station was less than a kilometre further on. Besides, I am no basketball player and I figured this was probably not the best time for a lesson.

A short train journey from New Jersey was the only thing that stood between me and the Big Apple, and thankfully I didn’t have to wait too long. Car is king in the US, with gas guzzlers littering the highway, so unsurprisingly the train service is disappointingly basic. The Amtrak [3] fleet resembles more of a poorly maintained Soviet relic than a train service suitable for the world’s leading capitalist nation [4] – and certainly is nowhere near as advanced as the public transport in parts of Asia and Europe. Nevertheless, like a lot of things in the US, it has character, and it did the job it was designed to do.

Thirty minutes later and I had arrived. ‘The concrete jungle where dreams are made of’ [5] was upon me, and now all I had to do was navigate the subway to my final destination, Brooklyn. The subway journey was a disaster – so many things went wrong that I could write a whole post on it – but most notably, the ventilation was appalling; if I had taken a canary down there, it would have perished before I had even purchased my ticket.

Manhattan and Brooklyn are worlds apart. I knew this before I came. I grew up listening to hip hop artists like Jay-Z, who painted vivid pictures of the harshness of life in (certain neighbourhoods of) Brooklyn. Of course, I hadn’t booked myself into the ghetto – my hostel was located in an up and coming [7] hipster area – but I was under no illusions that I would be staying in Manhattan luxury. After all, I was only staying one night, so I wanted a more authentic New York experience.

Manhattan reminds me of London’s financial district, but with more (and taller) skyscrapers and ‘new money’. London’s history is ever-present and unavoidable, yet Manhattan, like almost all American cities, is strikingly devoid of anything far back beyond the 20th century. It is the epitome of globalisation – a consumer’s dream, where corporations, franchises and retail stores line every street. But I was left with a lukewarm feeling of New York’s flagship borough.

New York was everything I expected it to be, but nothing like I had hoped. Of course a one-day reconnaissance survey – which I had,  [9] in effect, undertaken – cannot possibly do justice to the sprawling metropolis, but I still came away with a strong first impression.

I finally made it to my hostel to check in shortly before 5pm. It was supposedly not in the ghetto, but it was one of the most rundown areas I had ever seen in the developed world (the photo below does not do justice to the nearby streets). Shady characters lurked outside corner bodegas [10], graffiti lined the walls and barbed wire-topped fences encircled the scrapyard-type business across the road. I wasn’t going to be lurking around here until 2am, that was for sure, but at least I had made it. I was exhausted, jet lagged and a bit hungry, but feeling obliged to explore New York, I set off in the direction of Manhattan for an evening of limited exploration. An hour and a half later – and with no tourist attractions ticked off the list – I was back. I was in no mood to try my luck alone in Brooklyn after dark. 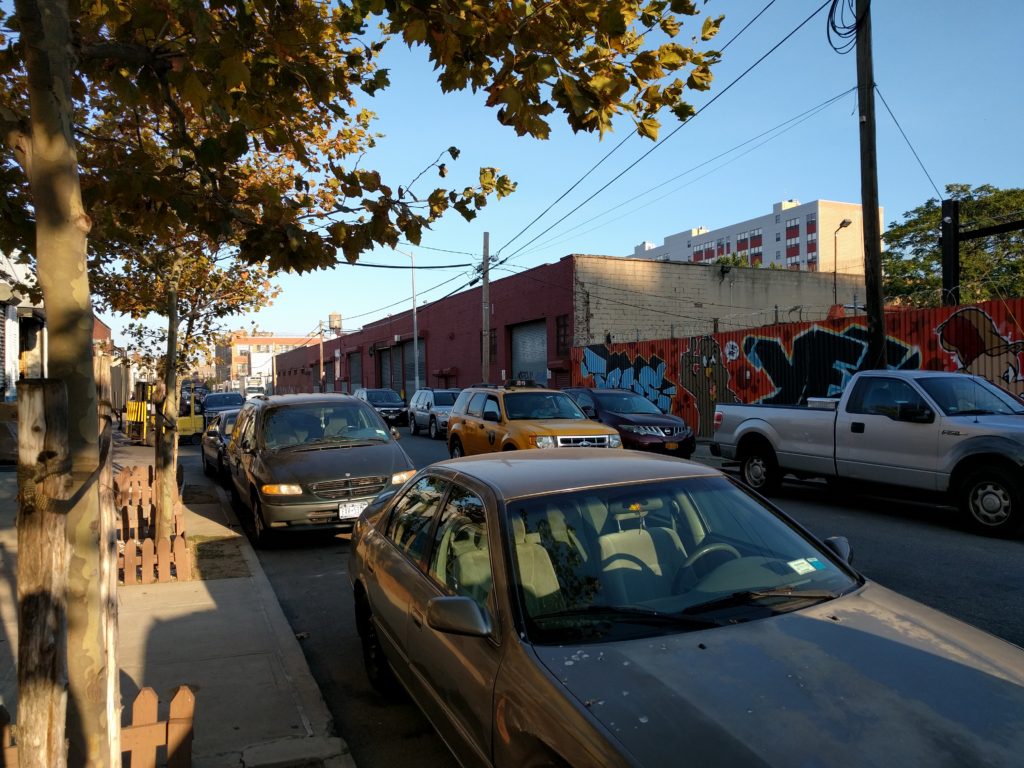 A picturesque view from my hostel doorstep.

“Nothing’s equivalent, to the New York state of mind”. [8]

What is the NY state of mind? In a city so bipolar, it can be hard to put your finger on it. It’s a jungle out there – every man for himself [11], where if you aren’t one of the lucky ones then life is a struggle. But it’s also the city of dreams, where fortune and fame are promised to those who are prepared to work hard enough to achieve it – at least that’s what they tell you.

Charles Darwin could have constructed his theory of evolution on the streets of New York. It’s survival of the fittest, and those who don’t successfully adapt to their surroundings are finished. The deprivation of the ghettos is shocking, social mobility is almost non-existent, and if you want to be somebody then you have to take risks – risks that could cost your freedom or your life. The grit, resilience and single-mindedness is inspiring, but in a country as wealthy as America, the state of the have-nots is tragic.

It’s a place where the fearless pursuit of the American Dream by any means necessary leads to the romanticised celebration of the self-made individual; the individual who overcame all obstacles in this dog-eat-dog world to stand atop the mountain; the Tony Montana character [12] with “dreams of being a gangster and ruling over society by force alone…”

But where does that leave the intelligent man with dreams of tyranny?

“… As it is not so easy as the detective novels may lead one to believe, one generally relies on politics and joins the cruelest party. What does it matter, after all, if by humiliating one’s mind one succeeds in dominating everyone? I discovered in myself sweet dreams of oppression.” – Albert Camus, The Fall.

There’s only one place for it… Washington, D.C.

[4] By total GDP, rather than per capita.

[6] From Where Brooklyn At? by Notorious B.I.G.

[7] Quite where it was coming up from, I dread to think!

[8] From Nas’ ‘NY State of Mind‘, and the inspiration for this post.

[9] Very ineffectively, given that I managed to miss just about every tourist attraction on the way.

[11] To borrow the well known phrase. Needless to say, every woman for herself also applies.