Thursday the 11th of April – Another busy day in Tbilisi

The first meeting on Thursday was probably my favourite meeting of the trip! We met with the deputy foreign minister and the main negotiators for both the EU and NATO. Georgia is extremely EU-positive with 85% of the population wanting to join the union and at any official building there would be both the Georgian and the EU flag. Knowing that they are not likely to become members anytime soon, they remain committed to become more deeply integrated with the EU, so that when the time is right, they can join. On the question whether Georgia is in fact a European country or not, the answer from all three was strongly affirmative, arguing Georgia is both geographically, politically, culturally, and historically European and that it is written in the agreement with the EU. Concerning the conflict in Abkhazia and South Ossetia, Russian occupied territories, the Georgian government was not willing to negotiate with leaders of the regions, as they considered them merely as Russian puppets and that the conflict is one between Russia and Georgia. As Russia argues it is a domestic, Georgian issue, they refuse to negotiate and thus the conflict is frozen as the parties cannot even agree on which are the parties of the conflict.

After the visit to the Ministry of Foreign Affairs it was time to get our dose of the Georgian private sector. We met with Neiron and Good Morning Georgia, two tech start-ups from Scandinavia which recently decided to enter Georgia. We were eager to find out why. First of all, though, we got a thorough introduction to AI and some other hot topics related to technology. One could perceive that companies like these play a crucial role in the Georgian economic development that we had learned about at other meetings. Not only by generating job opportunities, but also by facilitating innovation and technological advancement. A key reason to their presence in Georgia is the support they receive from international institutions, which further strengthened the impression that they are indeed practical examples of successful initiatives for economic development.

Our third meeting of the day was at Kvinna till Kvinna, a Swedish organization working on peace and security connected with female empowerment in the Abkhazia and South Ossetia. They described the situation for women and the lack of women and LGBT-rights. Although the Georgian culture is evolving since the fall of the Soviet Union, especially with the new post-Soviet generation, it is still a highly conservative country dominated by traditional family values of male dominance. There is a glorification of women, and especially of mothers, but they are not allowed any influence of freedom, but should rather serve their men and take care of household and children. There is, however, a growing feminist movement in the larger cities.

After Kvinna till Kvinna we headed straight to the UN House in Tbilisi to meet with the UNDP. There we got a great overview of the development in democracy and human rights made by Georgia in the last decades.

After a long day we enjoyed a casual dinner together with a group from Young European Ambassadors – a part of the EU Neighbours project aiming to provide a platform for young people interested in integration with the European Union. We had a great time and appreciated the chance to share our reflections with young locals.

To conclude, we had a fantastic Thursday packed with impressions, insights and interesting discussions. One thing that made this day special was the compact mix between different kinds of meetings, which provided a chance to reflect over how different parts of the Georgian society connect to each other. 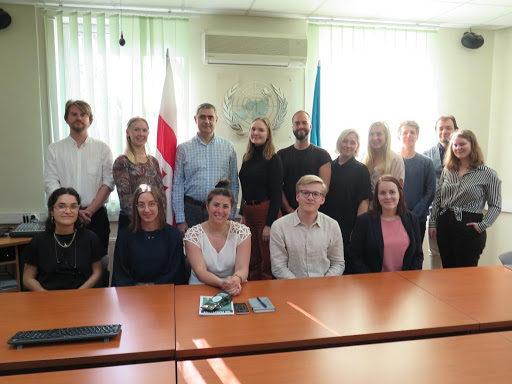 At the UN house in Tbilisi talking to the UNDP. 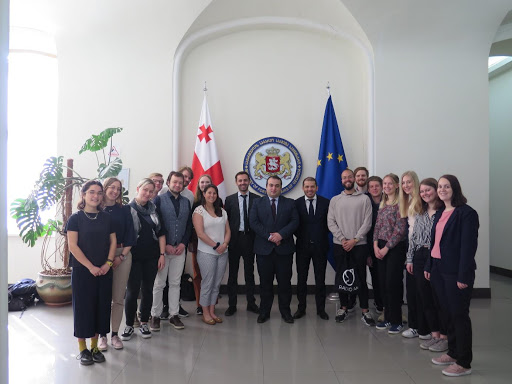