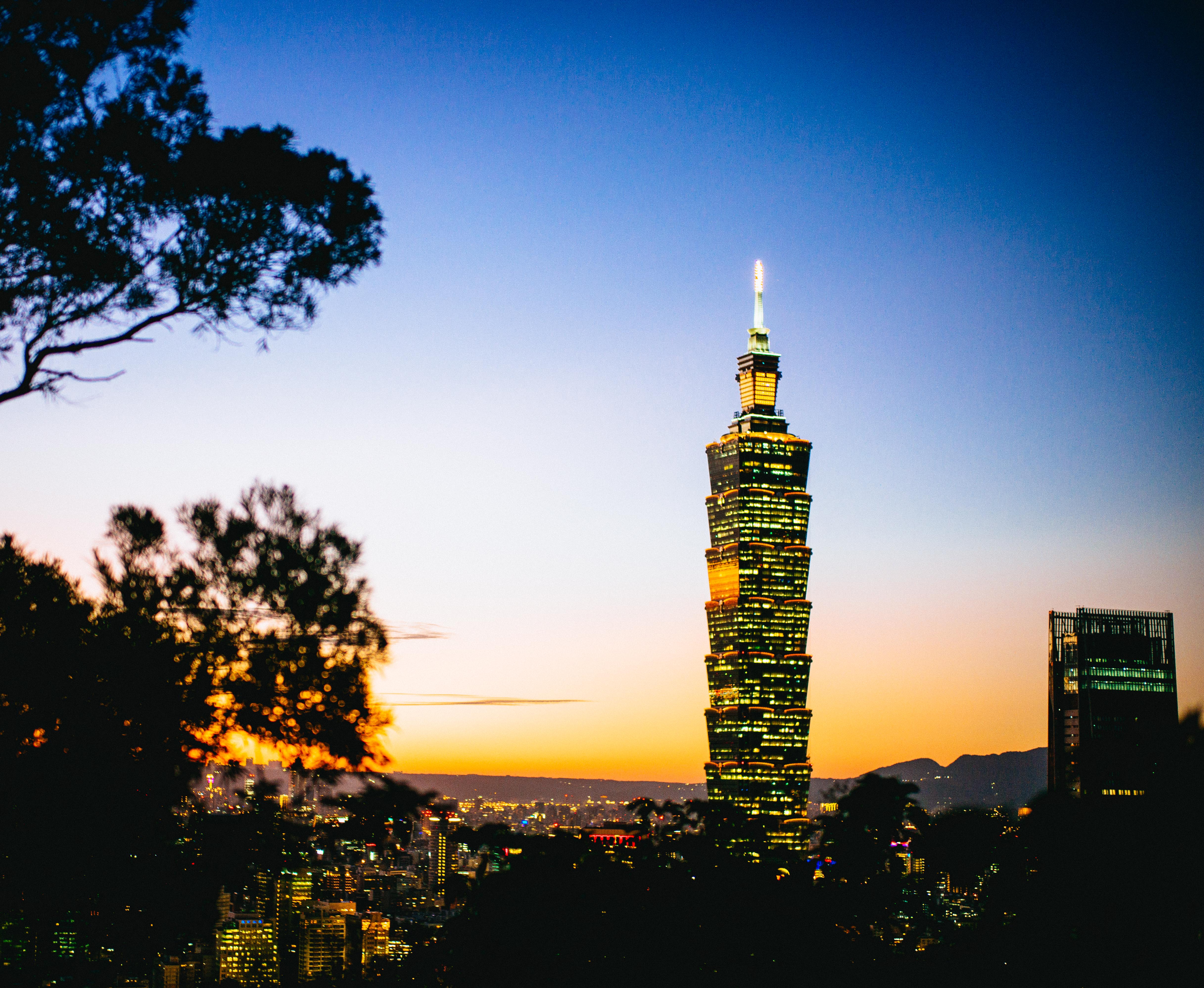 The sun peaked through thin blinds, while sleepy swedes stirred from jet-lagged sleep. With blue skies and a temperature of 30 C, memories of cold and rainy Sweden quickly faded in this tropical paradise.

Our first meeting of the day started at Covestro. It’s a German-owned polymer company with focus on recycling and innovation. German organization quickly exposed itself with the company’s keen interest in acronyms. “Covesteo: curious, courageous, corful.” “Covestro: people, planet, profit.” My marketing teacher would have been proud.

Next came lunch. The groups were divided and the experiences were drastically different. Some had fresh local fruit, while others ate noodles with cockroaches. After lunch, groups reassembled displaying vastly different facial expressions: ranging from complete satisfaction to utter disgust. Happily, I ate the local fruit.

I learned more in one hour about Taiwanese culture, than 3 weeks of briefings.

Freddy Lim is a true character. He arrived slightly late, had a long pony tail, warm smile, and a clean suit.

His calm demeanor and ease with information makes him an ideal and adept electorate. He has a soft spoken nature that contrasts a previous life filled with stage-dives and rock music

An exubrent energy is often lacking in the political scene. However, a life on stage has prepared Freddy for an ease with the masses, as well as an ability to channel passion along his political journey.

“When I was 18, I realized I wanted to embrace my own culture. I thought, If I have a chance, I should help bring about change: faster.” – Freddy

Communication as a commoner, platform as a politician. Humble as a local, eloquent as an intellectual.

He delved deep into political policies that created a clearer picture of the Taiwanese society. During a time when everyone is tearing down China and the political agenda is sorely focused on UN involvement, Freddy offers a refreshingly positive outlook:

“First, [Taiwan] should be thankful for its current situation. We have a fully functional democratic government. Mongolia has been fighting for independence for years with less successful results.”

He continued by elaborating:

“China is an issue, but it’s not the only issue.”

With three days of hearing China being referred to as: “the true enemy”, it is refreshing to hear a political contrast.

Freddy specifically recognized opinions affecting the younger generation. He continued with a focus heavy on evening out the Taiwanese wealth gap.

The entire UPF group was in shock to hear such genuine words uttered from a politician’s mouth. However, Freddy Lim is much more than a typical politician.

Our third and final meeting of the day was with the organization, TAPCPR. (Taiwan alliance to promote civil partnership rights) To convey the right context, it is important to know the news headline on 5.24.17:
“Taiwanese constitutional court, rules that prohibiting same sex marriage is unconstitutional.”

This was a huge step towards basic freedom; A freedom that is central to society and has been overlooked by countless nations.

Like many countries worldwide, Taiwan is battling for a civil liberty: a battle for love that is common and relevant. A struggle that can’t be fixed with a new law, (it’s a start) but needs rather a change in the hearts and minds of millions. Victoria Hsu and the rest of TAPCPR are hoping to bring about change in their home country. Their main priority is to, “Give the LGBT [community] the equal right to get married.”

Victoria was extremely outgoing. She possessed an enthusiaism that many strive after in the work environment. We began with quick introductions and then seamlessly transitioned from a typical PowerPoint briefing to an engaging group discussion.

Victoria’s enthusiasim was contagious. She was curious about our LGBT world views and listened intently. Discrimination and it’s reflection on society is never an easy discussion topic. Opinions were debated. Cultural views clashed. A complex topic produced a mixed discussion. This was youth international affairs at it’s core.

That was it for the days work; next came play. We are tourists, so it was only natural to act the part. It was time to visit the island nation’s prime attractions: Elephant Mountain and Taipei 101.

We arrived at elephant mountain as the sun began to set. The transition from metropolis to wilderness is immediate and unassuming. It’s hard to believe only a fifteen minute bus ride separates Taiwanese concrete and natural jungles.

Not wanting to miss the incredible views among the fading light, a brisk tempo up the mountain began. For those unaware, the Taiwanese climate is incredibly warm and humid. Therefore, formal dress is not recommended for climbing a mountain in the rainforest. We didn’t have a change of clothes and must have looked quite amusing climbing the endless steps.

Covered in sweat and smiling from ear to ear we made it to the overlook just in time. Deep purple lit up the skyline. The views stretched from metropolis and mountains to forest and sea. The last light revealed a true island paradise.

Darkness arrived in a haste. Fading purple and orange transitioned to colorful neon. The mega city’s night owls began to wake. Taipei 101 was only a quick 15 minute walk away. 2004’s tallest building was packed. It’s only fitting that a building with characteristics like a Thai food to-go box should be filled with restaurants. Eyes bulged, stomachs rumbled and we feasted. Taiwanese, Korean, Thai and Chinese food simultaneously filled plates and bellies. 45 minutes and 5kg later, we headed for the observation deck. The lookout was awe-inspiring. Society loomed as a field of ants below. The city rush came to a crawl. We gazed out over the horizon, hushed, reveling in the joy from our complete day.

It was a fitting ending to an amazing day; One that disappeared in a flash. The morning was filled with corporate, political and passion meetings. The afternoon was spent in jungle and concrete mountains. While explaining events to friends and family back home, many stated: “what a great week!” To which our replies were: “what a great Tuesday!” This short summary explains the trip best: Work and play for the most complete days! 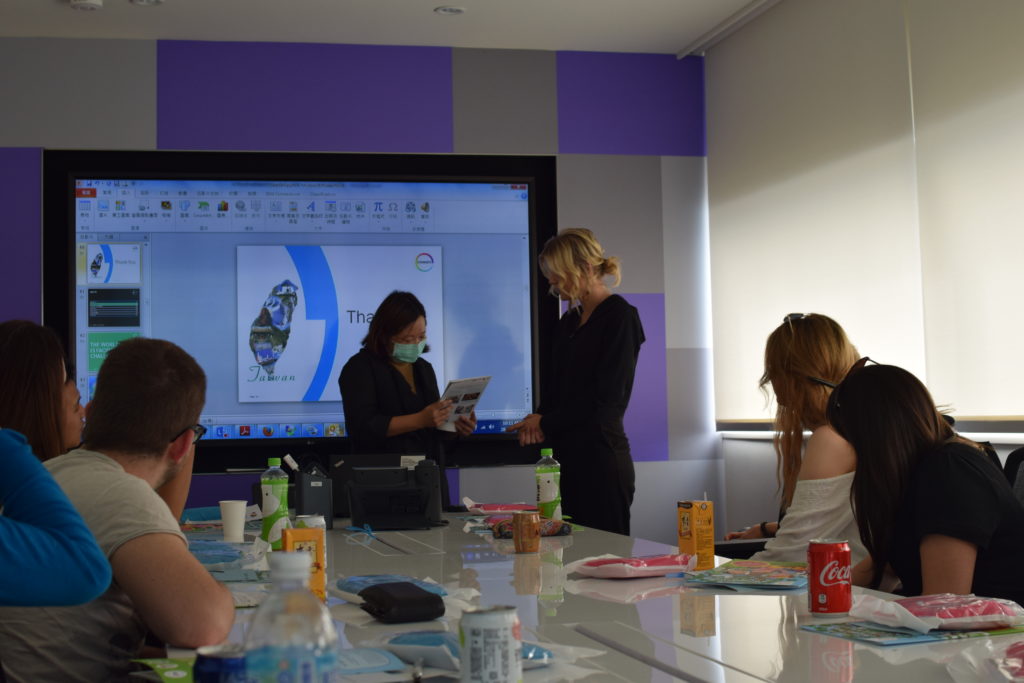 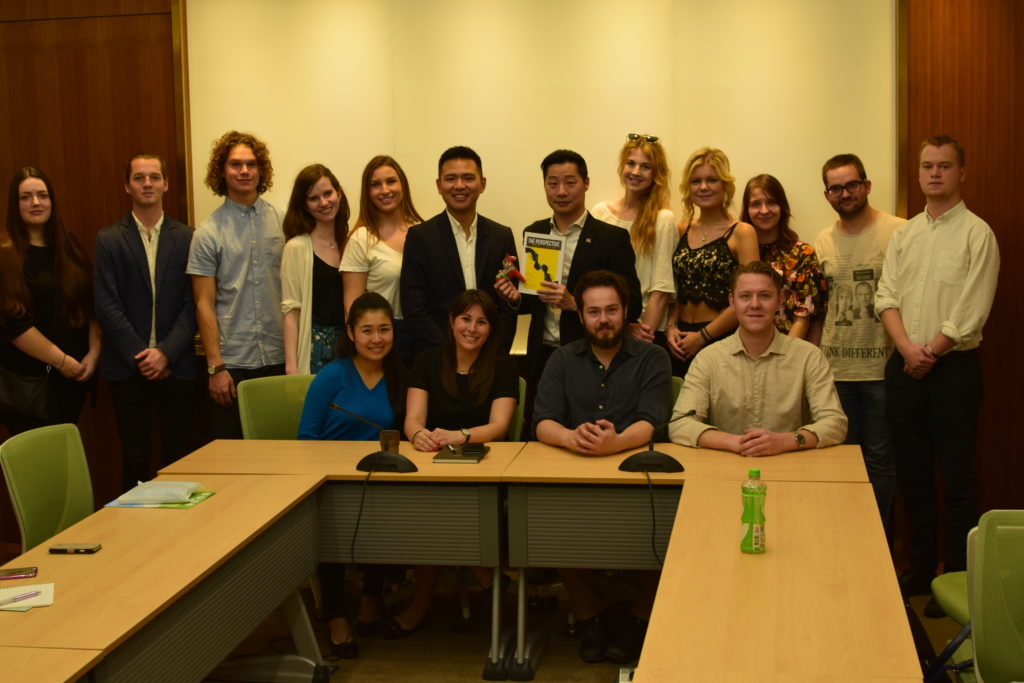 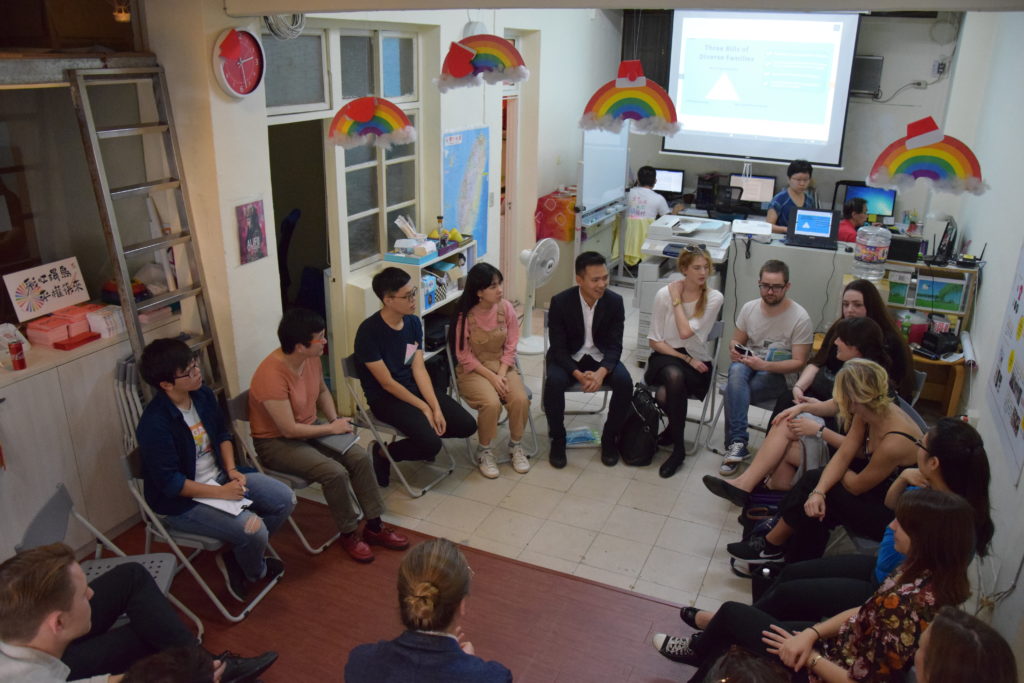 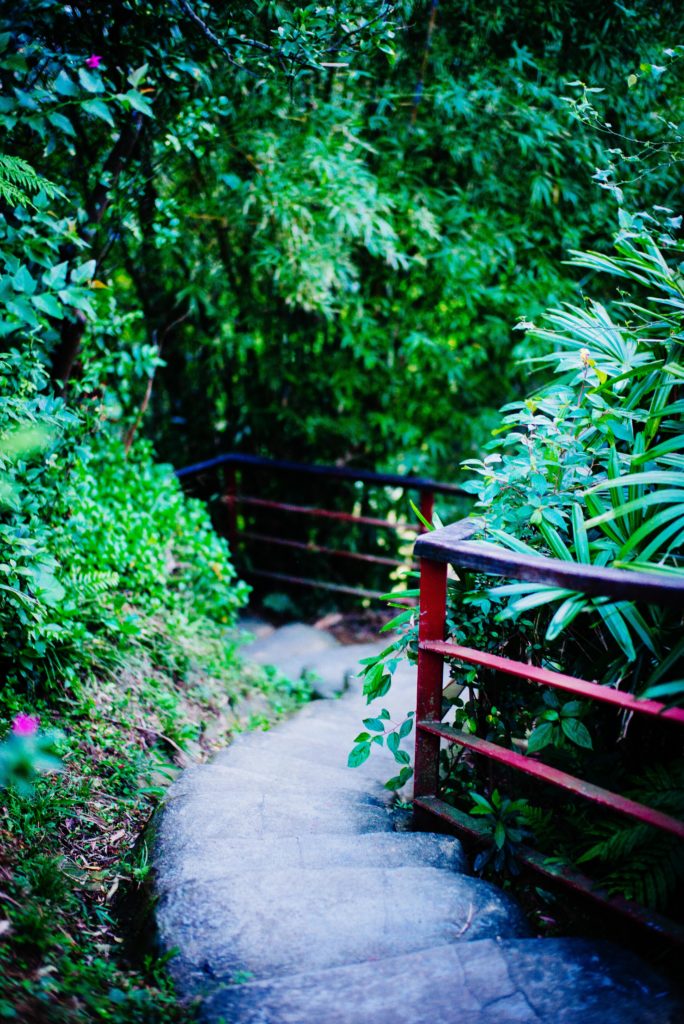 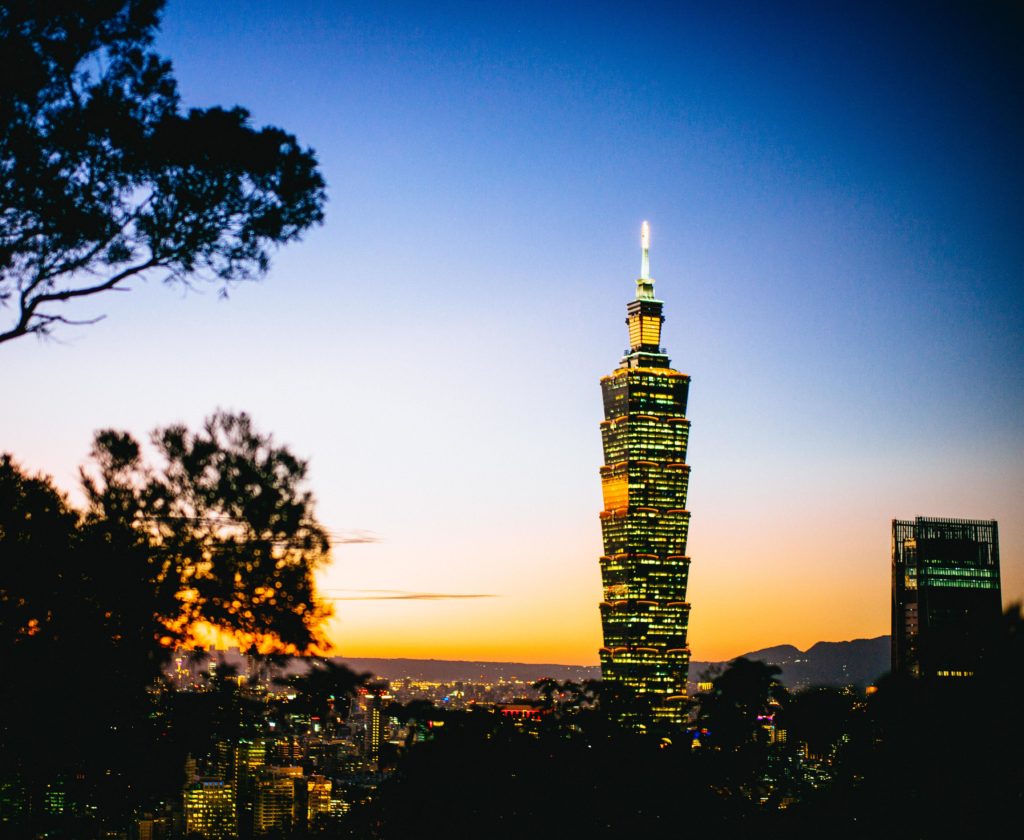