Friday the 12th of April – Croissants, Questions and Clubbing

Friday started with a visit to the Swedish Residency, where we were greeted with enough cinnamon buns, croissants and other pastries to feed a small army. And a small army we were. By coincidence, both UPF Lund and UF Malmö were in Tbilisi at the same time, so 34 people packed into the ambassador’s private abode to hear more about the work that Sweden was doing on his watch.

The ambassador was tending to his other duty as ambassador to Armenia, so we were left in the very capable hands of the deputy head of mission, Eric, and SIDA’s representative, Molly, two of the most impressive representatives that we met all week.

Sweden has had a presence in Georgia through SIDA (Sweden’s development agency) since 1997, but the embassy is a more recent addition, established in 2010. Sweden’s main aim is to assist Georgia in forging closer ties with the EU, but whether that means they wish for Georgia to eventually become a member of the EU is another matter. It’s a long way off anyway, so let’s just leave that for another day.

The atmosphere was relaxed, and Eric and Molly were open to any and every question that we threw at them, from the best book to read to understand the region (answer: Ali and Nino, a love story between a Georgian and Azerbaijani during the early 1920s), to the ways that Sweden supports LGBT rights (answer: too many to list in one sentence), and even why so many of the Georgian taxis have their steering wheel on the wrong side (short answer: they are imported).

After lunch, we were off to the Anaklia Development Consortium, and I (James) had my best suit on to impress. Anaklia is a small seaside town on the west coast of Georgia with a population just shy of 1,500 people, but plans are being made to build the first deep-sea port in the region by 2021. It is more than just a port. Anaklia represents a vision of Georgia as a transit route between Europe and Asia, a route that offers an alternative to the instability of Russia, Iran and Turkey, and in the process offers the opportunity for economic development and an international incentive to preserve Georgia’s independence going forward. But at least as interesting as the project was our host for the afternoon, Tedo Japaridze, who had over thirty years’ experience as a diplomat and policymaker in Georgia. He had been foreign minister, national security advisor and ambassador to the United States, so he had a wealth of stories to draw upon, as well as the wisdom of a man with a deep understanding of the region.

The third meeting of the day was with an NGO called CENN. That is an organisation that works with environmental issues around the South Caucasus region. Their main goal is to create a sustainable way of living to protect the environment and world. To do this, they are, as they state on their website, specialising “in a number of areas including combating climate change, sustainable resource management, waste management, building and developing healthy and prosperous climate-resilient communities, and empowering women and youth to create innovative and inclusive solutions.” It was a really interesting meeting where they explained how they worked to reach their goal. They also explained how they usually work with children and youth, since they are the future and how important it is that they are aware about this climate crisis. We had many questions and as all the other organisations we visited, they were really enthusiastic about answering everything we wanted to know. This organisation also provides paid internships, so if anyone is keen on moving to one of the coolest cities ever – my personal opinion (Josefin) – to get a paid internship, you could apply for this.

After this last study visit for the day we went to a restaurant to meet up with UF Malmö. It was a Georgian restaurant with long tables so that we could all sit together. It had an amazing buffet with Georgian food including eggplant-rolls with pomegranate, hummus, Georgian walnut salad, dill potatoes, BBQ vegetables, and khinkali, the best of the Georgian kitchen. It was also cool entertainment with traditional Georgian music and dance.

Afterwards, we went to a bar area called Fabrika. They had many different bars with something for everyone. Some drinks later, we went to a techno club called Bassiani. It was under a football stadium and the place was huge, it was a cool place for everyone and not just the hardcore techno lovers. A great way of ending a Friday in the coolest city, Tbilisi. 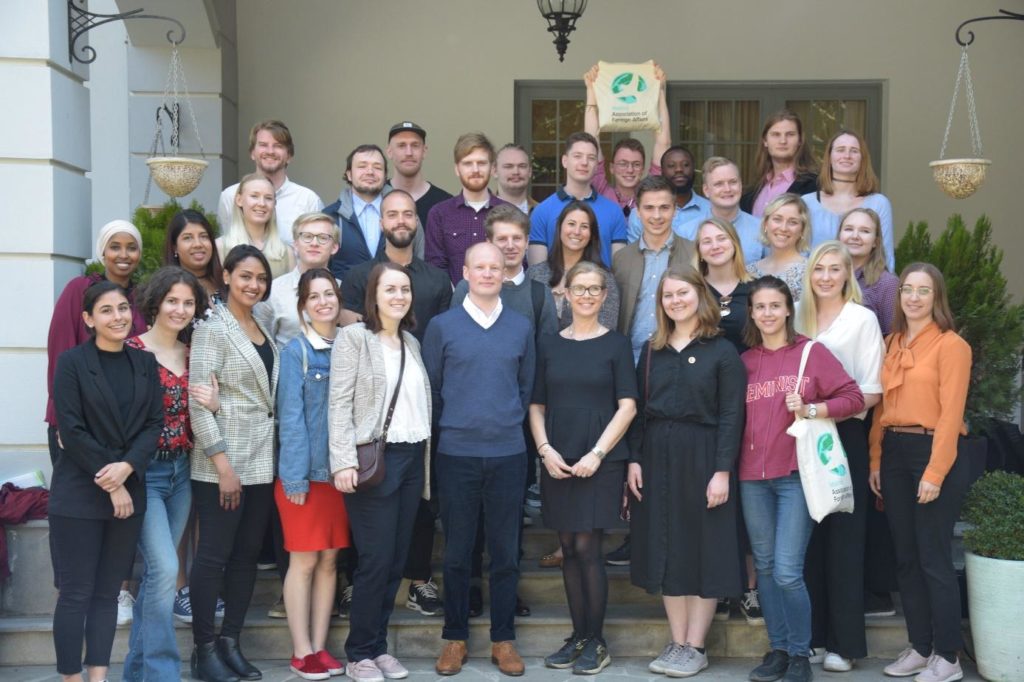 Posing for a picture together with UF Malmö and the embassy staff at the Swedish Residency. 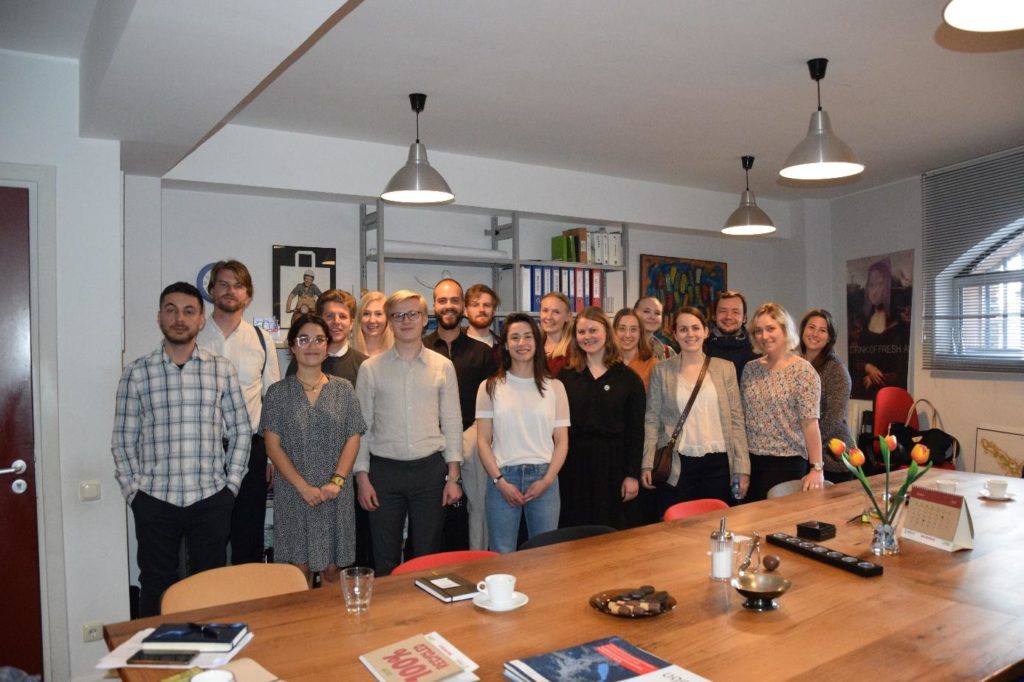 Feeling inspired after meeting the CENN and seeing an office full of young, driven and talented people.