First day of the adventure 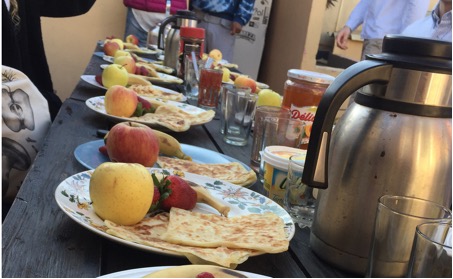 It is common knowledge that every explorer needs to prepare for an important day with a sturdy breakfast, and Medina Surfing Association sure provided one for the UPF travel group. The very sweet personnel handed out Moroccan pancakes, fresh fruit and the infamous Moroccan sweet tea to a surprisingly hungry group of students. Unfortunately, we had to gobble down the food in a hurry, as we had better things to do than to hang around.

Hurryingly and with determined steps, the gang headed of to our first destination, which was the Swedish embassy (not a bad place to start your day at). Once there, the First Embassy Secretary and the intern kindly received us with provisions in form of fika.

Although we didn’t get to hear any state secrets, the embassy told us many other intriguing things. For example, Sweden and Morocco’s relationship stems back all the way to the 1700’s, and the intern was a former champion in the Swedish quiz show Vem Vet Mest. But perhaps more importantly, they told us about the most central aspects of Sweden’s work in Morocco. They fall under the categories politics, human rights and promoting Swedish culture and business.

To make matters even more exiting, we also had a pop-in visit by the migration assistant working on transferring illegal Moroccan immigrants in Sweden back to their home country – a delicate and difficult task. 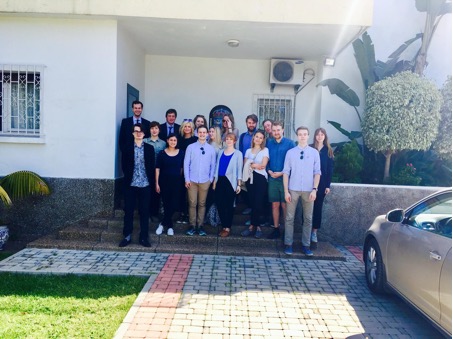 Although tempting, you cannot stay on Swedish territory forever when you’re in Morocco. So the troop marched out of the flashy photo session in the sun and on to meet Amnesty International. 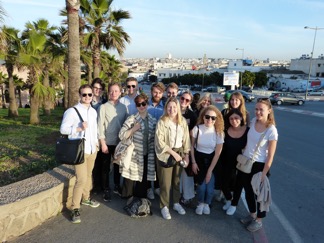 The Arab Spring did not particularly affect Morocco, but the events did raise awareness in the country and empowered mobilization of youth and has increased political awareness in the country. Amnesty chooses to focus on two global campaigns for two years in five priority countries. Right now, Morocco is one of the prioritized countries for both the campaigns, which means that Amnesty International is quite busy at the moment. Not only that: they are also watched. Closely. Wherever they go, there is someone following their movements. This might be a case for Lund’s own spy, who spoke at one of our lectures. But there was no time for us to arrange secret meetings – the troop had a new urgent mission: to eat.

After a late and well-needed lunch our energy was back on track and the happy coupf-coupf gang strode towards the third study visit of the day. The Rabat center for political and strategic studies held a seminar on the role of Morocco in fighting terrorism in Africa. The topic is certainly interesting, but unfortunately there had been a misunderstanding and the seminar was held in Arabic. 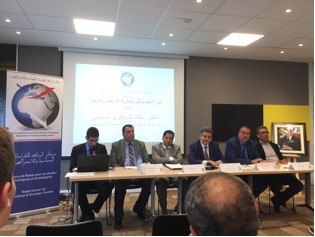 Despite the language barrier, it was an experience to participate in a seminar that seemed more like a press release than anything else. People in suits, the sound of smattering cameras and the coupf-coupf explorer gang filled up the room. It was also interesting that the photographers paid equal amount of attention to the panelists as they did to the audience. Our attempt to look fully focused even though we couldn’t understand a word is documented and can be found at the organization’s Facebook page.

Back at the hostel the time for dinner was creeping closer and the hostel employees where kind enough to guide us in the narrow crooked streets of the Medina. Medina is the old town of Morocco and a beautiful part of the city where there are no cars, a lot of markets and colorful old buildings. 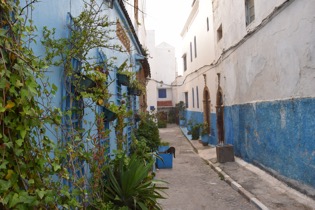 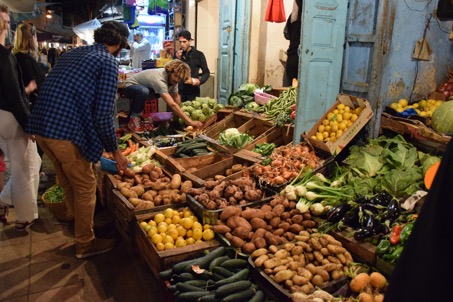 Once the shopping bags were filled with food, strawberries (and a few small beer bottles purchased in a shabby bar) we headed back to the hostel and helped chop some veggies. But to be honest, we mostly lounged on the hostel rooftop and hung out – an explorer must know when to rest. While we were basking in the sun, the sterling hostel personnel cooked us a classic Moroccan dish called Tagine, named after the special casserole with the same name that the dish is cooked in. To eat delicious Tagine on the rooftop and looking up to the Moroccan sky was just a perfect ending on a long and intense day in Rabat. 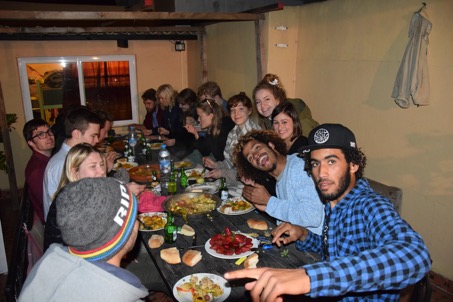 This post was written by Sofia and Julia, members of the Rabat 2017 travel committee.