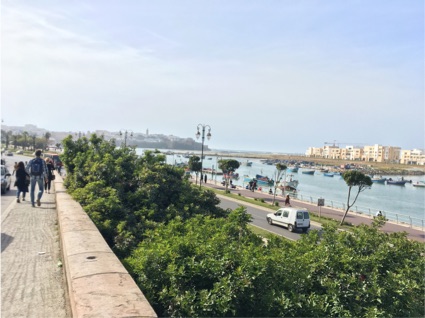 Oh, beautiful Rabat. It’s so easy to long back for you! À bientôt, inchallah.

Once you arrive in Morocco you are immediately stricken by the bilingualism of the country. The sound of chatter in French and Arabic will reach your ears and wherever you look signs that will guide you are written in both French and Arabic. Merhaban bikum!, Bienvenue! (Welcome!). Formularies to be filled in about your travel destination are informative from both left to right (French) and from right to left (Arabic).  If you find languages as a fascinating subject like I do –  then Morocco is for sure an interesting case to observe more closely. 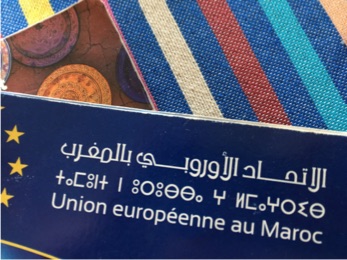 Our notepads from the EU Delegation will show you what Berber language looks like: the text in the middle is Tamazight.

Morocco was previously ruled by both Spain and France, and colonialists have left their traces. At the time when Morocco gained independence from France in 1956, all education was held in French. After the independence there was consequently a reaction of ”arabization” to regain the status of Arabic. Today, education in Morocco is given in Arabic, but French is still considered an important language. French dominates in the urban elite, in spheres such as higher education and business.

Long before Spaniards or French ever reached North Africa, the region was inhabited by a people called Berbers (or ”Amazigh” in their own language, meaning ”free people”). The Berbers as a group share their own culture and they also speak their own language, very different from Arabic. There is a variety of different dialects within the Berber language, however the most common form is called ”Tamazight”. Approximately one third of the Moroccan population speaks some kind of Berber dialect.

As other indigenous peoples Berbers have also suffered discrimination. The movement of arabization after the independence in 1956 meant that Arabic was prioritized over other languages in education, and governmental authorities even forbade Moroccan children to bear Berber names. Authorities also sought to silence Amazigh-movements demanding Morocco to recognize the Berber population and their presence in society. The treatment of Berbers improved significantly in 1999 though when King Mohammed VI entered power.

2011 was the year when the Arab Spring swept over the region, but the regime in Morocco remained stable. The king quickly promised some political reforms in 2011 to prevent revolutionary eruptions, promises which he also acted on. The king promised to draft a new constitutional text and one of the changes was that the constitution should give Berber language (Tamazight) the same official status as Arabic. You should be able to study Tamazight in school and information from the government should be accessible in both Arabic and Tamazight. 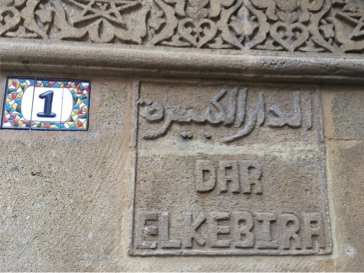 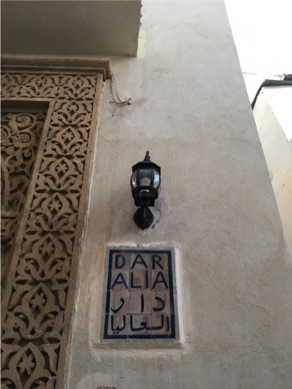 It’s a pure joy to stroll around in the old parts of Rabat and linger on in colorful alleys, to sneak your nose into small a bakery or just inspect the old houses ornamented with cute details. The one to the right is called ”the tall house”, and the one to the left “the big house” : )

So far this change might not have been thoroughly implemented. Yet, it can be seen as an important symbolic action to acknowledge the Berbers and their culture. Tamazight gaining official status can be considered important from other perspectives as well. At our visit at the UNDP the question came up when we discussed equality and the challenge to create equal opportunities for urban and countryside residents. Questions that arise are for example: can a Tamazight speaker expect to receive the same service at a hospital as an Arabic speaker? Can the hospital guarantee that there will be doctors and nurses who understand and speak Tamazight too?

To be able to express yourself is a powerful thing in its simplicity. Hopefully the recognition of Tamazight will pave the way for an even more inclusive climate in Morocco.

This post was written by Emma, member of the Rabat 2017 travel committee.